The atmosphere in and around Volkswagen Philippines is building up to the much-anticipated arrival of the T-Cross subcompact SUV, which the Ayala-backed Philippine distributor has declared would herald Volkswagen’s global “refresh” in the country.

The world has caught on with the charms of the multi-awarded T-Cross ever since it premiered in 2018. By its second sales year in 2020, the T-Cross sold approximately 300,000 units worldwide, achieving this milestone despite the limitations presented by the pandemic. What makes the T-Cross an overwhelming success has been its design and engineering that embody its singular design statement, “I am more than one thing”. 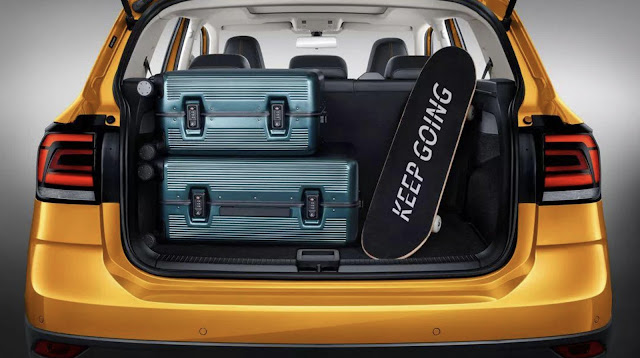 “I am more than one thing”—that’s the call of a new generation of young, accomplished professionals continuously claiming new grounds in an uber-competitive world. These career-oriented individuals have a plan, and they intend to use successes—yes, even setbacks—as launch pads for the next milestones in their personal and professional journeys. For them, success is just another phase in the constant evolution of their dynamic lifestyles. As such, their vehicles should be able to keep up with such dynamism and carry them through new avenues of opportunities. This is precisely the new generation of motorists defining the reinvigorated Volkswagen.

With its worldwide sales success and glowing reviews from automotive experts, the Volkswagen T-Cross is anticipated to make waves in its Philippine debut. This was the context of the discussions between members of the media and top executives of Volkswagen Philippines during the roundtable meeting held online on April 21.

Exciting talks centered on more appealing details of the 5-seater T-Cross, and how its features would amplify the dynamic lifestyles of its owners: 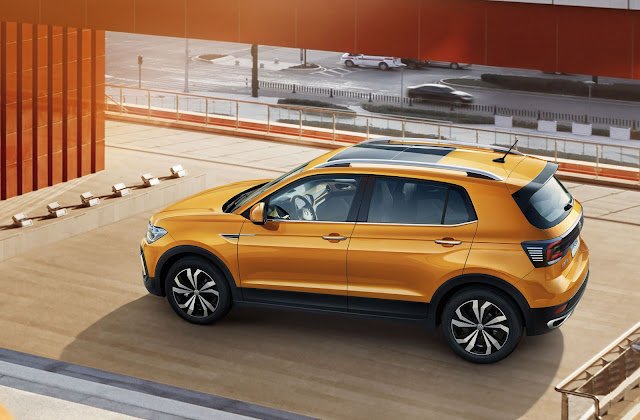 “I am cool”. The T-Cross’ trendy exterior design and youthful interior layout reflect its owner’s sophisticated yet fun sense of style. The aggressive exterior design is wrapped in unique colors such as Tribu, Syringa Violet, Romance Red, Polar White, and even Chinchilla Gray, adopting the importance of aesthetics by combining young urban fashion with its style and functionality.

This multifaceted design and engineering excellence that goes into every T-Cross that rolls out of Volkswagen’s three manufacturing hubs (Germany, Brazil, and China) have been recognized around the world by award-giving bodies, most notably by the BusinessCar Awards 2019 in United Kingdom (Best Compact SUV), the 2020 Continental Tyres Irish Car of the Year in Ireland (Compact SUV of the Year), Frankfurt Motor Show 2019 in Germany (Best “Exterior Volume Brand”), UOL Carros 2019 and L’AutoPreferita in Brazil (Compact SUV of the Year), and the 5th annual Cars.co.za Consumer Awards in South Africa (Compact Family Car category winner).

“I am versatile”. It’s all about being more than what you seem, and for the T-Cross, it’s being able to provide more space than what the usual can offer. Having the longest wheelbase in the 5-seater subcompact SUV class with 2,651 mm, the T-Cross can comfortably seat 5 persons and still offer 329 liters of luggage space at the back, which can even expand to 1,319 liters with rear seats folded. So, while you say you’re more than one thing, the T-Cross can still take in your everything. From your work, to your weekend hobbies and recreations, the T-Cross can carry all the loads that come with the lifestyle of the active millennial. 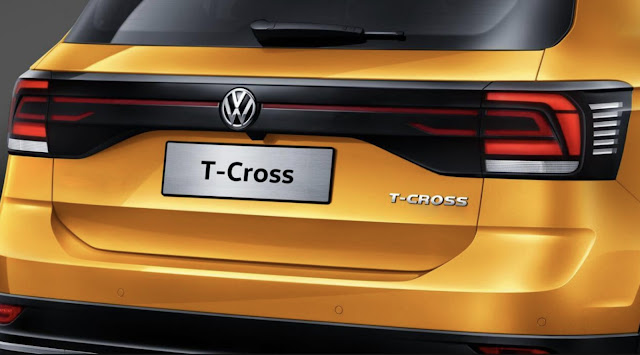 “I am comfortable”. The amenities of the T-Cross are exactly where you’d instinctively think they’d be. Everything inside is in their proper places. The controls and infotainment system with Apple CarPlay and App connect can be seen at a glance for easy use. There’s available rear air-conditioning and USB sockets for the back passengers, as well as a soft seat cushion and comfortable steering wheel perfect for long out-of-town drives. The T-Cross can be attributed to embodying a singular mind with the user, with its end goal of prioritizing driver comfort and accessibility for an enjoyable and worry-free cruising.

“I am safe”. The T-Cross earns its 5 stars in the European New Car Assessment Program (NCAP), the Australasian NCAP, and Latin NCAP safety rating with its host of standard safety features such as the strong body structure, LED tail lights, electronic stabilization program (ESP), cruise control, tire pressure monitoring system, and additional safety features (for the SE variant): 6 airbags, LED headlights, rear camera, rear park distance control (PDC), and autonomous emergency braking (AEB). Though you may indeed be more than one thing, you still have just that one precious life, and in the T-Cross, that’s protected at all times. Above all, driver and passenger security and peace of mind are of the highest priority, allowing you to focus on spending more valuable time with your loved ones.

The T-Cross would come laden with significant ownership value in aftersales. With its once a year periodic maintenance service (PMS), the T-Cross is on average 40% more affordable to maintain compared to its competitors in the segment for the duration of 5 years of ownership. This would be on top of the warranty coverage of 3 years, or 100,000 km (whichever comes first); spare parts warranty of 2 years, and; service quality consistent with Volkswagen standards across the world.

With the world-class workmanship of the T-Cross combined with aftersales services that focus as much on the customer’s needs as the optimal upkeep of his or her vehicle, the overall motoring lifestyle experience with the T-Cross simply translates to more quality time devoted to pursuing passions and fulfilling dreams, and actually living that long-planned-for adventure with friends, associates, or family. During the discussions, the two T-Cross variants were revealed, both with a Euro6 emission standard 1.5-liter engine with 6-speed Tiptronic AT: The T-Cross 180 MPI AT S and the 180 MPI AT SE, both capable of generating maximum power output of 113 Ps and 145Nm of torque, ideal numbers to achieve optimum fuel efficiency while providing enough juice to either keep you on pace with your hectic professional schedules, or keep you contentedly cruising during those idyllic countryside sojourns. 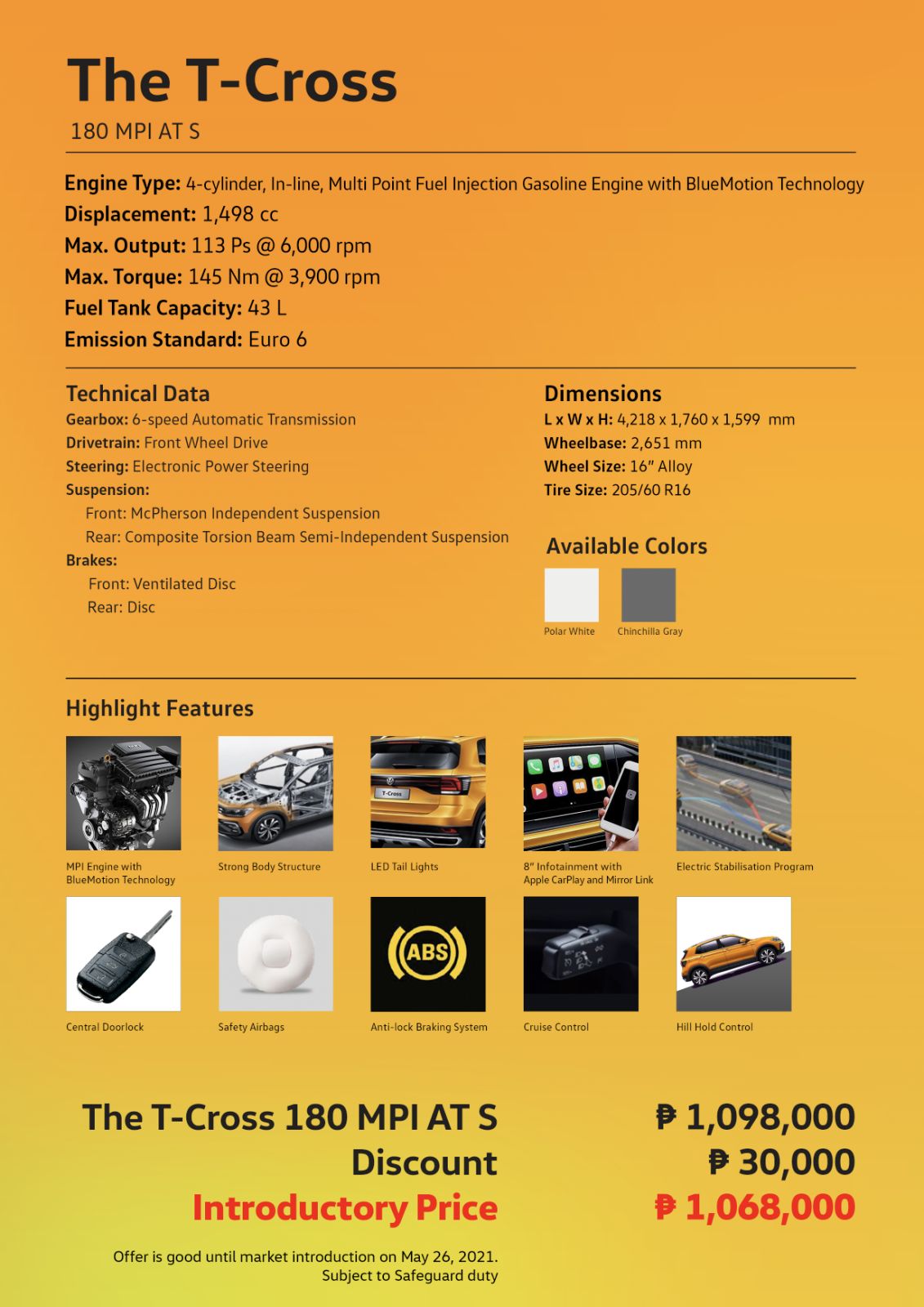 The T-Cross 180 MPI S would be offered at P1.098M, while the 180 MPI SE would be pegged at P1.198 million with an additional discount of P30,000 off the announced SRPs. These introductory prices and discounts will be available for those who will reserve their T-Cross units before the market introduction this May.

And that should be the cue for those who’ve long been pining for a T-Cross to get in touch with their nearest Volkswagen dealership for a reservation. You’ve waited long enough. It’s time to place the crosshairs on your next target: Be among that elite group of T-Cross owners.